19 million cooling and freezing appliances (CFAs) discarded in Europe every year have a greenhouse warming potential of up to 26 million tonnes of CO2 – Incorrect treatment in Finland, Germany, Greece and Sweden poses a threat to European climate protection goals – Environmental NGOs urge EU Member States to use the requirements of the European standards for treatment of old CFAs in national legislation as already done in countries such as Austria, Ireland or the Netherlands 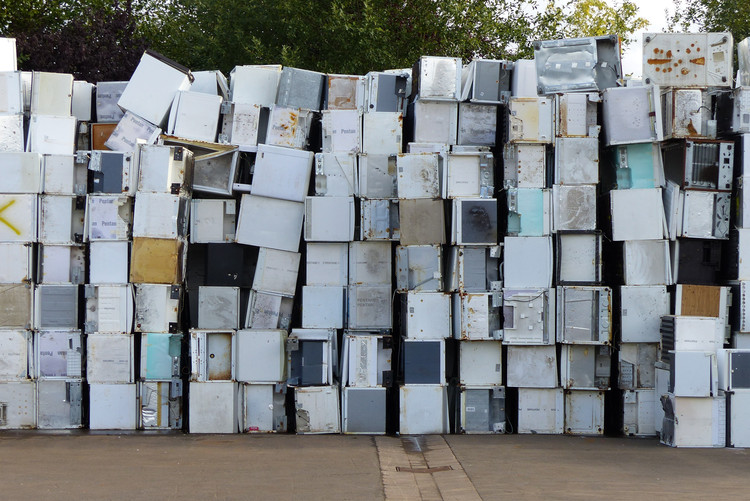 Brussels, 8.11.2018: About 19 million cooling and freezing appliances (CFAs) are discarded every year in Europe. Nearly half of these appliances still contain coolants and propellants like chlorofluorocarbons (CFCs), which, if released into the environment, destroy the ozone layer and accelerate global warming. Altogether, CFAs disposed of every year in Europe have a greenhouse warming potential of up to 26 million tonnes CO2 equivalent – much of it is released into the atmosphere by improper disposal operations.

“One single refrigerator with CFCs can speed up climate change as much as 2.8 tonnes of CO2. This equals the CO2 emissions of a medium-sized passenger car within one year. Even if a refrigerator is returned to an official collection point, you cannot be sure that it is treated correctly in all EU countries. Particularly in Germany, Greece, Finland and Sweden, we have evidence that minimum quality standards are not met. These governments must act now to stop further unnecessary damage to our planet”, says DUH Executive Director Jürgen Resch.

The three NGOs therefore call on EU Member States to harmonise the treatment of CFAs in their legislation to the highest common denominator. One easy way to do so would be to make the requirements of the European quality standards EN 50625-2-3 and technical specification TS 50625-3-4 mandatory in national waste legislation. These standards for instance require treatment operators of CFAs to provide a detailed material flow balance and to prove that they meet the minimum recovery targets of 90 percent of contained CFCs.

Such legal obligation is already set by Austria, France, Ireland and the Netherlands, which have made the EN standards’ requirements mandatory. “By referencing high treatment standards for the recycling of cooling and freezing appliances in legislation and safeguarding their compliance with reliable audits, large amounts of CO2 emissions could be saved in a simple way and without expensive funding programmes”, states Stéphane Arditi, Policy Manager at EEB.

Mathilde Crêpy, Programme Manager at ECOS adds: “Although standards are often developed by industry alone, these treatment standards were successfully drafted in close cooperation with ECOS and DUH. We now urge legislators to use these standards to set ambitious legally-binding requirements for handling cooling and freezing appliances and help reach EU climate objectives.”

In Greece, correspondence with the take back system Appliance Recycling S.A. and the operators shows that treatment plants receive CFAs while not meeting audits based on the standards. This is a clear sign that less than the necessary 90 percent of coolants and propellants are recovered. “The Greek government and Appliance Recycling need to stop this practice immediately”, says Philipp Sommer, Deputy Head of Circular Economy at DUH.

In Germany, producers of CFAs – responsible for a proper treatment – supply operators with CFAs without providing evidence that the operators are compliant with the EN standards. In several cases, operators do not recover sufficient quantities of CFCs from the isolation material or simply claim water to be recovered CFCs. Currently, the German government is planning to stipulate elements of the EN standards in a weak administrative regulation, which will take 5 years to be effective and allows for exemptions at any time.

Finally, the Swedish take back system El Kretsen AB supplies one or more operators with CFA although they are illegally releasing volatile hydrocarbons into the atmosphere. This is against Directive 2012/19/EU and can lead to significant emissions of CFCs. “We also have evidence that several Finnish treatment plants process CFAs in open shredders. We informed the authorities about this breach of European law, but for the time being these unacceptable treatment practices continue”, adds Sommer.

Map highlighting discrepancies in the treatment standards for CFAs in Europe

Information on refrigerants from ECOS: http://www.ecostandard.org/category/refrigerants/

Press Release in Greek: See below

The European standard EN 50625-2-3 (Collection, logistics & treatment requirements for WEEE - Part 2-3: Treatment requirements for temperature exchange equipment and other WEEE containing VFC and/or VHC) and the associated Technical Specification TS 50625-3-4 were developed in response to a Mandate of the European Commission, M/518, in support of Directive 2012/19/EU on Waste Electrical and Electronic Equipment (WEEE). DUH, ECOS and EEB consider that these treatment standards describe the technical state-of-the-art for treating CFAs in an environmentally-sound manner.